I am re-posting this post with the comment that Danny told me that it took three years to completely recover from schizophrenia. He did not experience any relapses. Other patients who had BEAM surgery had one or more relapses and had to resume higher doses of anti-psychotic drugs for periods of time. In my book I give a complete realistic story of the patients and their recoveries. Ultimately, this treatment has had highly successful results compared with any currently available treatments. 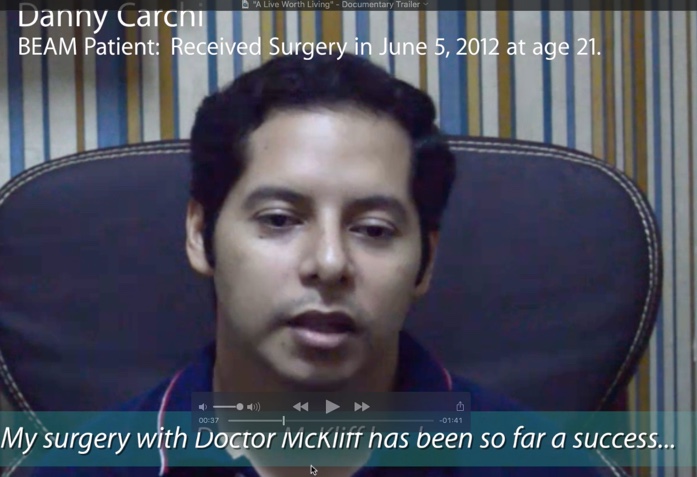 The day after arriving in Guayaquil, we met the first patient, Danny Carchi. Danny is a thirty-two-year-old man who lives with his mother and twin brother in Guayaquil, Ecuador. Before having the BEAM surgery, he studied electrical engineering at a university, but due to his illness, he had abandoned his studies eight years ago. He was submitted to BEAM in 2012, four years ago.

His disease began in 2005, when he was twenty-one years old, with an intense catatonic state. Two years later, he was diagnosed with schizophrenia. He experienced tactile hallucinations under the skin and audio hallucinations. His mother said that he was so rigid and had such tremors that she had to feed him with a spoon. She was completely desperate, and when Danny saw an article about Dr. Mackliff and the BEAM procedure in a college paper and showed it to her, she called immediately and made an appointment with Dr. Mackliff.

This is how the patients and Danny’s mother described their experience of living with schizophrenia.

DANNY: “I thought I was being chased, that people could read my mind—everybody was paying attention to me. I had a hyperactive mind—too many ideas.”

NARCISA: “I had perceptions. I thought that my family didn’t love me. I totally was out of focus. I couldn’t concentrate in my studies. I was a very good student, but after all this started, I couldn’t sleep, I had problems to establish relationships, and I stopped going out of the house. My siblings always have been there for me, but I was always rejecting them.”

ROBERTA (DANNY’S MOM): “He would become rigid—a lot of sweating. He couldn’t keep his balance. His food would fall from the spoon while eating. At this point, I was desperate. We reached a point in which I had to feed him, especially at dinner time, after I came back from work. At bed time, his feet became very cold, so I took him to the doctor; the doctors diagnosed him with depression.”

From the first day after surgery, Danny told his mother that the acoustic hallucinations had disappeared for the most part; he stopped believing that the car horns were directed at him. His attention, memory, willpower, and thought content were normal according to Dr. Mackliff.

A few months after the surgery, Danny told his mother that he felt normal and that the disease didn’t bother him anymore. He wanted to return to the university, and he did. He is now in his third year at the university studying Informatics.

Danny has the confidence and composure of someone who knows who he is and knows who he is not. He is a clear example of the maturity of someone who has recovered from a great trauma, schizophrenia. He looked directly at us while speaking, spoke deliberately and intentionally, and was warm and compassionate. It was such a pleasure to know him.

He stated that it took about three years to completely recover from his illness—that it was little by little. Danny is now on one-fourth of a tablet of antipsychotic medicine per day and has a completely normal life. He lives with his mother and twin brother who has just graduated from the same university in Guayaquil.

When asked what, his message would be for young people with schizophrenia in the United States, he said, “Have faith, believe in your healing, have the surgery, have hope, and never give up.” “Never Give Up” was written on a T-shirt a girl was wearing while I was running along the Malecón on the morning of the interview.

His mother’s message to other mothers was that “meeting Dr. Mackliff and knowing the BEAM surgery was a true blessing from God. My life and my son’s life have been restored, and I am so grateful.”

Roberta told us, “I would tell the families of patients with schizophrenia, not to hesitate, go for the surgery, with Dr. Mackliff or with whoever they like or can, because in our case, this gave us back our life, I was on the verge of madness.”

Danny’s message to others with schizophrenia was, “What I can tell anybody suffering from this disease is to keep the faith, keep going, fight, and with this doctor’s help, you are going to be better—your life is going to be normal again. I know this because Dr. Mackliff’s treatment has been successful for me, and after the surgery, I haven’t had any relapse; I have continued with the medications for a while but only one-fourth of a tablet daily. So, keep up. Trust in God. He will help you.”

I would like to add the comment that Danny told me that it took three years to completely recover from schizophrenia. He did not experience any relapses. Other patients who had BEAM surgery had one or more relapses and had to resume higher doses of anti-psychotic drugs. In my book I give a complete realistic story of the patients and their recoveries. Ultimately, this treatment has highly successful results compared with any currently available treatments.

Please share this post with others who like you are looking for a schizophrenia solution. You won’t find this information anywhere else in English. It is the only treatment solution for schizophrenia, and it will never be found by the millions of dollars of pharmaceutical funded research in developed countries.