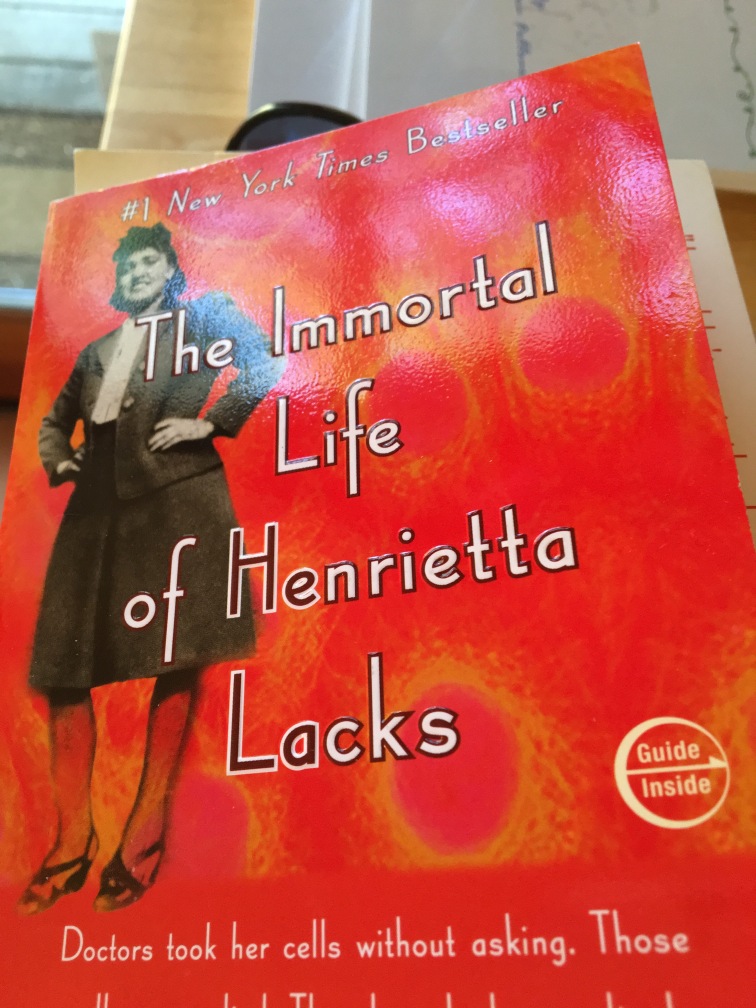 “The Immortal Life of Henrietta Lacks” was recommended to me as a research based literary book that was excellent in the quality of writing, clarity in presenting an interesting and relevant scientific topic and had a high level of research that went into the presentation of the topic. The topic was the highly malignant cancer cells of a poor and unknown black woman in the South which were taken by scientists without her knowing and became the medium for millions of cell cultures distributed across the globe for conducting research on cures for various illnesses and the effectiveness of drugs. Her cells are responsible for finding the vaccine for polio in the 50’s. It became a billion dollar business that brought a lot of medical ethics into question; especially when they were injected into human subjects without informing them that the cells were highly malignant cancer cells.

The drug industry, especially with their highest profit cancer and antipsychotic drugs; would provide a rich topic for a similar non-fiction literary book to be written. Medical ethics come into question both in the experimenting on human subjects with these drugs;  the rapid approval of these drugs without adequate testing and evaluation of long-term effects; the prescribing of these drugs to millions of vulnerable young and old persons without adequately describing the side-effects and the overall ineffectiveness of the drugs in treating psychotic and bi-polar illnesses.

The drugs are represented as “antipsychotics”, but in truth are major tranquilizers that block not only the neuro-receptors for dopamine, but the neuro-receptors for the feeling, cognitive, moving and sexual centers (pituitary) of the brain. “Movement indifference” or lack of motivation to move is a common side effect of antipsychotics. Though they help to control psychotic behaviors at first, prescribed at high dosages, if the dosages are not reduced, they result in apathy, flattened emotions, movement indifference, cognitive difficulties, and inability to perform sexually. This is the reality behind antipsychotic drugs and the reason why 75% of young people stop taking the drugs within the first year and a half.

The drugs are commonly prescribed at much higher dosages than the international consensus for safe dosages recommends. The negative side effects including suicide (the final episode) are under-reported, if reported at all. Patients receiving these drugs are not properly educated about the side effects and overall ineffectiveness of the drugs to improve the mental health of the persons taking the drugs. One only needs to refer to the drug company supported Schizophrenia Forum to hear the complaints from parents and patients who are on long term use of antipsychotics. The young adults lay on their beds unmotivated to do anything; have extreme weight gain and problems associated with it ; suicide attempts and a lifetime of reoccurring hospitalizations.

Psychiatrists receive payoffs for prescribing high cost antipsychotic drugs under patents and receive free drugs in exchange for prescribing them. Human subjects, often needy college students, prisoners and soldiers, are used to experiment with the new drugs. Directors of clinical studies are funded with high salaries and additional payoffs for reporting favorable outcomes from studies on anti-psychotics and recommending their prescribing for young people with bi-polar disorders and other non-psychotic mental illnesses. The pharmaceutical industry controls the education of parents with children with mental illnesses through funding the National Association of Mental Illness (NAMI) and their associated Schizophrenia Forum. No alternative or factual information on the adverse effects of antipsychotic drugs are allowed to be published on these sites.